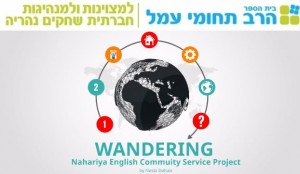 
An innovative project was implemented in the city of Nahariya this year by Nesia Dahan’s 10th grade 5 point English class from Nahariya’s Amal Shchakim Multidisciplinary High School. They created an experiential walking tour of Nahariya, which is fun, informative and exciting. This tour gives people the opportunity to learn through experience and is very much in tune with David Kolb’s experiential learning model (ELM).
The students followed a work process which included three steps:

Step One:  Choose a Station. What is a station? It can be anything from a place, to a piece of artwork, a historic restaurant, or even an interesting person. An important element, was that each student had a personal interest or connection to the station they chose. For example, one student’s station was her family’s business, a local bakery in Nahariya. Another student chose his grandfather’s assisted living facility that was established for Holocaust survivors.  One more example is a student who elected to write about the workout park where he meets his friends, on a weekly basis.

Step Two:  Create the Content. Each station‘s content consists of a descriptive paragraph where students wrote about what their station looks like, their personal connection to it and what it is. Then they were required to come up with two challenging and intriguing questions about their station, an experiential activity that would create an unforgettable memory; also specific information including, but not limited to, the following:  historical facts, practical information such as opening hours and cost, to things they personally found to be of interest.

The Third and Final Step: Upload.  After compiling all of this material, the students uploaded it to ExperienCity an internet platform which helped them to create an interactive map of the city.

During the execution of this project many skills were developed. Students improved their English writing skills by composing descriptive paragraphs and questions about their stations. Exposure to new technology challenged them to cultivate their already expansive knowledge. When they themselves experienced the walking tour they learned how to evaluate each other’s work by giving feedback and constructive criticism.

Why is this a community service project you might ask, or who is it serving? Well, there are several answers to these questions. Every year, student delegations from Germany and the US come to Nahariya and this is an outstanding way to introduce them to the city. Fellow educators and schools can also use this walking tour to teach youth about the rich history, culture and hidden treasures that Nahariya has to offer. Another audience, this tour could be geared towards, is English speaking tourists of all ages who can benefit, as well, when looking for things to do while visiting Nahariya.


If you would like to experience the walking tour for yourself you may enter the tour through the subsequent site:  https://beta.experien.city/cityportal/#/sites/naharia-shehakim.

The city of Nahariya and Amal Shchakim Multidisciplinary High School are looking forward to your visit!
The prezi: https://prezi.com/view/8CeJt9JshXHqg1vKhLTv/